A network discovery task aims to scan the the network, and reports devices found to the GLPI server, so they can be added to the list of known assets.

Once part of the list of known assets, further information can be retrieved from SNMP-enabled devices using a network inventory task.

This task uses the following protocols to scan IP networks:

Any device replying to at least one of those protocols will be discovered, with minimal information, such as mac address and hostname.

Additionaly, if the device replies to SNMP, the agent will attempt to identify it, using various methods:

Discovered devices are then reported to the GLPI servers, and import rules are applied. Devices not matching any import criteria will be kept in a server list of ignored devices.

The agent performing the task needs to have the network discovery module installed. Many Linux distributions ships agent modules in distinct packages, to reduce the burden of dependencies. And the module itself has multiple additional optional software dependencies, as noted earlier.

The agent performing the task needs network access the target networks, with forementioned protocols, as well as control access, for SNMP: just being able to send UDP packets to a device is not enough, if this device is configured to ignore them.

As for any other server-controled task, the agent should use either managed or half-managed mode, as explained in agent usage. If the task is server-triggered, the agent must run in managed mode, and its HTTP port should be reachable from the server.

You can then either activate the module for any number of agents, and even configure it to be activated by default, as illustrated by the following screenshot. 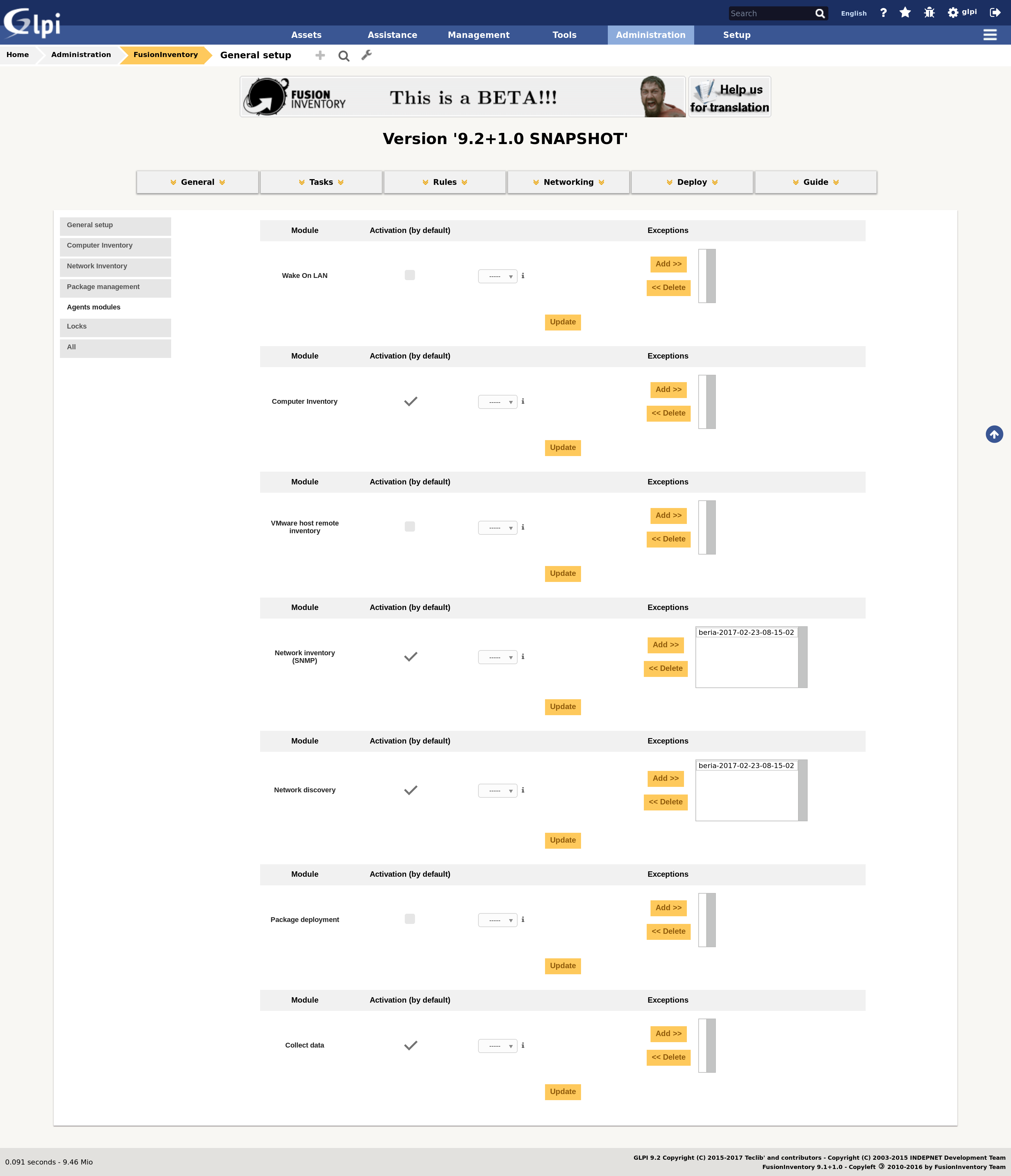 You can then activate the network discovery module for this agent, as illustrated by the following screenshot.

You now have to define an IP range item, corresponding to the the network to be scanned:

You can then create a new item, as illustrated by the following screenshot.

If you want to associate SNMP credentials to this network, for probing SNMP devices during discovery, you have to use the Associated SNMP authentication tab. Warning: each associated credential implies one additional authentication attempt, and another network timeout penalty if not successful. See Efficiency concerns for details.

You now have to define a task, including a network discovery type job:

Devices matching import rules should be immediatly added to the list of known assets. Others are kept in a list of ignored devices, where they can be manually reviewed and imported if suitable:

A network discovery task can be also performed without a GLPI server, allowing easier control and troubleshooting, with the fusioninventory-netdiscovery command-line tools. However, there is no way currently to inject the result in GLPI.

Unfortunatly, there is no way to distinguish a failed SNMP authentication attempt on a device, from the absence of a device. It means the agent will try each available credentials against each IP address, in given order, and wait for timeout each time. The most efficient way to adress this issue if to only use the relevant set of credentials, and reduce the specific SNMP timeout.

In order to scan multiple addresses simultaneously, the agent can use multiple discovery threads. This allow multiple simultaneous request, but also increase resource usage on agent host. And also increase crash probability, if TLS is used in any manner (including agent/server communication through HTTPS), as perl TLS bindings are not 100% thread-safe. Unfortunatly, there is no way currently to avoid thread usage totally, as current implementation always use one controlling threads, in addition to a configurable number of working threads.

The task doesn't run at all¶

The agent may be lacking the Net Discovery module: run fusioninventory-agent --list-tasks to check.

There may be a server/agent communication issue: check you can reach the agent port (62354 by default) from the server host.

The agent may be ignoring server requests, due to a a trust issue: check the agent logs for "[http server] invalid request (untrusted address)" message.

The task runs, but agent logs show than SNMP is not used¶

The agent may be lacking the required Net::SNMP perl module: run perl -MNet::SNMP on agent host to check, it should blocks.

There may be no SNMP credentials associated to the network scanned, check your IP range definition on server side (Networking > IP Ranges menu item).

The task runs, but no devices get added to my inventory¶

The task runs, but my SNMP devices are not properly identified¶

The agent probably lacks the device SNMP identifier in its internal database. Use fusioninventory-netdiscovery executable with debug option on the device, get the value from its output, and add it to the sysobject.ids file, as described in agent database to fix the issue.

This is likely to be a TLS multithreading issue. They are multiple ways to reduce the probability of such crash: * make sure you only have one TLS perl stack installed on the agent host, preferably IO::Socket::SSL + Net::SSLeay. Having both stacks at once (IO::Socket::SSL + Net::SSLeay vs Net::SSL + Crypt::SSLeay) usually leads to unexpected results, even without thread usage * use latest upstream release of IO::Socket::SSL, even if your distribution doesn't provide it * reduce threads number during network discovery tasks

However, the only actual solution currently is to disable SSL completly, using plain HTTP for agent/server communication. If the agent run on server host, that's usually not really a problem.